This post is covering a subset of what I am talking in my talk How I stopped worrying and learned to love parallel processing (currently only in polish).

This will cover on how, in terms of performance, AsParallel can kick you in a place where it hurts a lot, simultaneously being a blessing in terms of… performance. How is that? Let’s look at some

AsParallel was introduced as an extension to LINQ with TPL in .NET 4.0. In theory, it’s God’s sent. The promise was that it will:

And in the vast majority of cases, this promise was kept! For example look at this code:

When it is awesome

This is a trivial example (a more real life example was published recently by Ayende here, here, here and here), but stay with me. In this case, the difference between single threaded and parallel execution is as follows:

This is more than 4-times speed up with only 1 line and no additional code changes. Looks like all the promises were kept.

AsParallel on a to small set

Let’s change that code, and set the list size to 100. Then the results will look like that:

And yes. Those numbers are tiny. But if you have it in every web request or a small that’s frequently called function it cumulates and affects overall performance. When talking about small functions they have a habit of being used in other functions, thus creating bigger blocks. Those blocks tend to be … parallelized. So let’s see what happens then.

It is more or less the same code as above, but now we have:

One thing to note about CalcInTwoNestedAsParallel is that it splits the list into chunks when being invoked, but returns an IEnumerable. This trick defers the calculation of the prime until Count is being called. This way MeasureTime only measures the prime calculating part.

We have a ~7.6 times difference between the best and the worst run, and ~12.5 times difference when compared to a single AsParallel! It gets even worse when we nest it into another AsParallel (while maintaining the same total amount of calculations being done):

Take a look again at the last line: For 1000*1000 chunks containing 1 elements it took: 284 It was the fastest in this run although having very tiny (one element) lists.

The difference between the best and the worst run is this case is 11 times. When compared to the best run (a single AsParallel) it is more than 22 times slower! Why is that?

This is the dotTrace result for all of the above:

One nesting (so two AsParallel), 10 chunks: 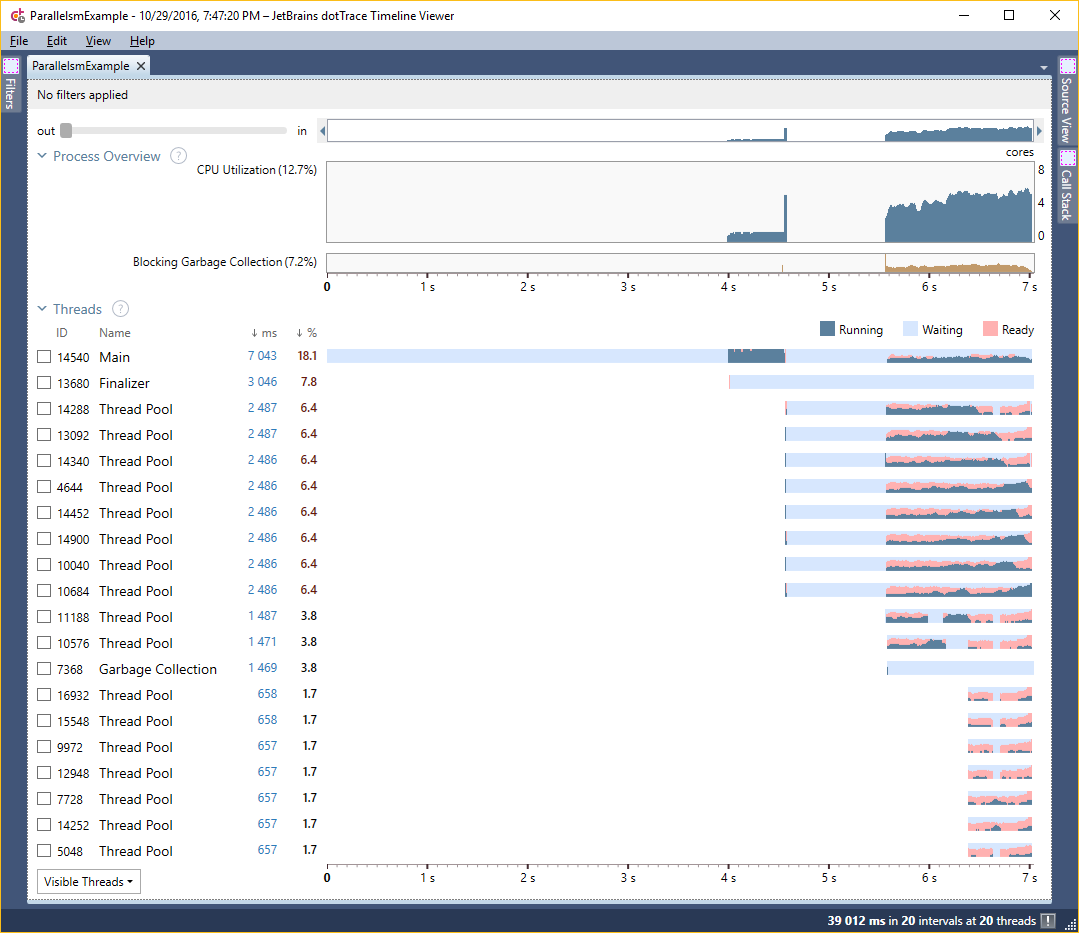 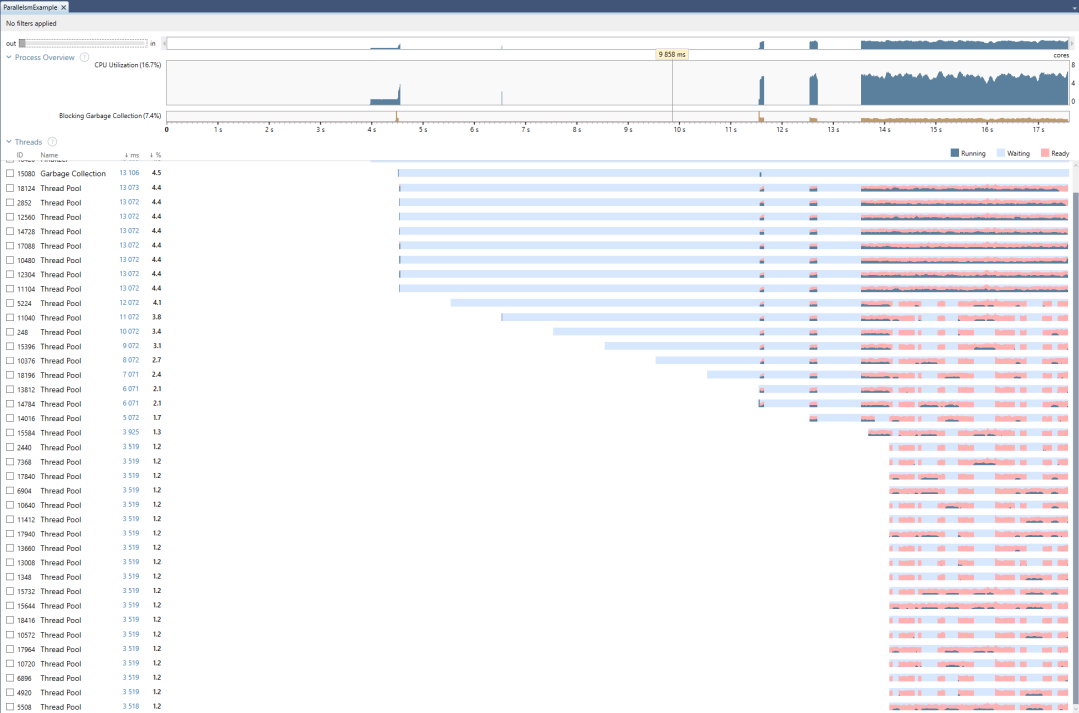 So what is happening in those applications?

The first thread is the main thread of the application. The long delay before spawning more threads is the start-up of the application and list creation. Next threads start to show up. This is because of the call to AsParallel. It triggers TPL’s TaskScheduler which tries to create just the right amount of threads to minimize context switching between them and, at the same time, parallelize as much as possible by assigning tasks to thread and if needed creating more threads.

So why do we have such huge difference in execution times? Then we compare the images, the answer what is wrong becomes obvious. The cost is hidden in switching and managing threads. TPL’s task scheduler is creating new threads and assigning tasks to them because it thinks adding more will help (a single operation is short). At the same time, the operating system is switching between threads, trying to give each a slice of processors time thus reducing the time real computation is being done. Those two managers are interfering each other leading to almost no work being done and in the end a 22 times increase in time needed for the work to finish.

This shows that micro-managing is not a good thing. In programming or in the real world ;)

AsParallel gives mind blowing performance gains with little to none effort. But it can’t be treated as a silver bullet. When you decide to use it: