This article is Part 2 in a 2-Part Series.

Diagnosing high memory usage can be tricky, here is the second part of how I found what was hogging to much memory in our system. In the previous post I’ve wrote how to create a memory dump and how many possibilities of catching just the right moment for it ProcDump has. When trying to analyze memory leaks, or high memory usage (not necessary meaning a leak) we have a few ways to approach it:

There are many problems with this approach, to name a few:

To sum up, this is not a good way to approach the problem.

Products like Redgate ANTS Profiler, JetBrains dotMemory can attach to a process and show current GC generation sizes, the paste of new memory being allocated, and compare memory between two points in time (snapshots). While those features are great when profiling and optimizing, they are not that useful when trying to diagnose what has allocated the memory.

The first one is the all powerful big boys profiler with text commands and text based gui. It has the power and the speed that none other profiler has, but 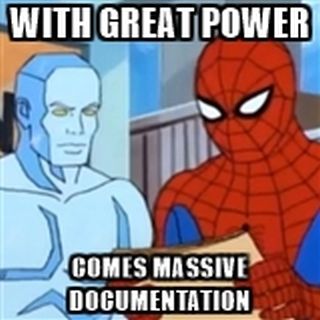 Another, more important in this cases, thing lacking is the ability to show dependencies between objects and memory they allocated. So let’s look at what .NET Memory profiler can do.

.NET Memory Profiler can have a tendency to crash after few minutes, sometimes even in less then one. As strange as it seams restarting the computer removes the problem. This happened to me 3 times.

First let’s load the dump file with File > Import memory dump.... This opens a nice import window with a few options and data to fill:

After pushing Start another window will appear asking for mscordacwks.dll and sos.dll. You need to take those files from the machine on which the dump was made. .NET Memory Profiler tries to give hints where to find them, but the exact framework version can be slightly different (4.5 instead of 4.6.1 etc).

After some time (depending from the dump size) the main window will appear: 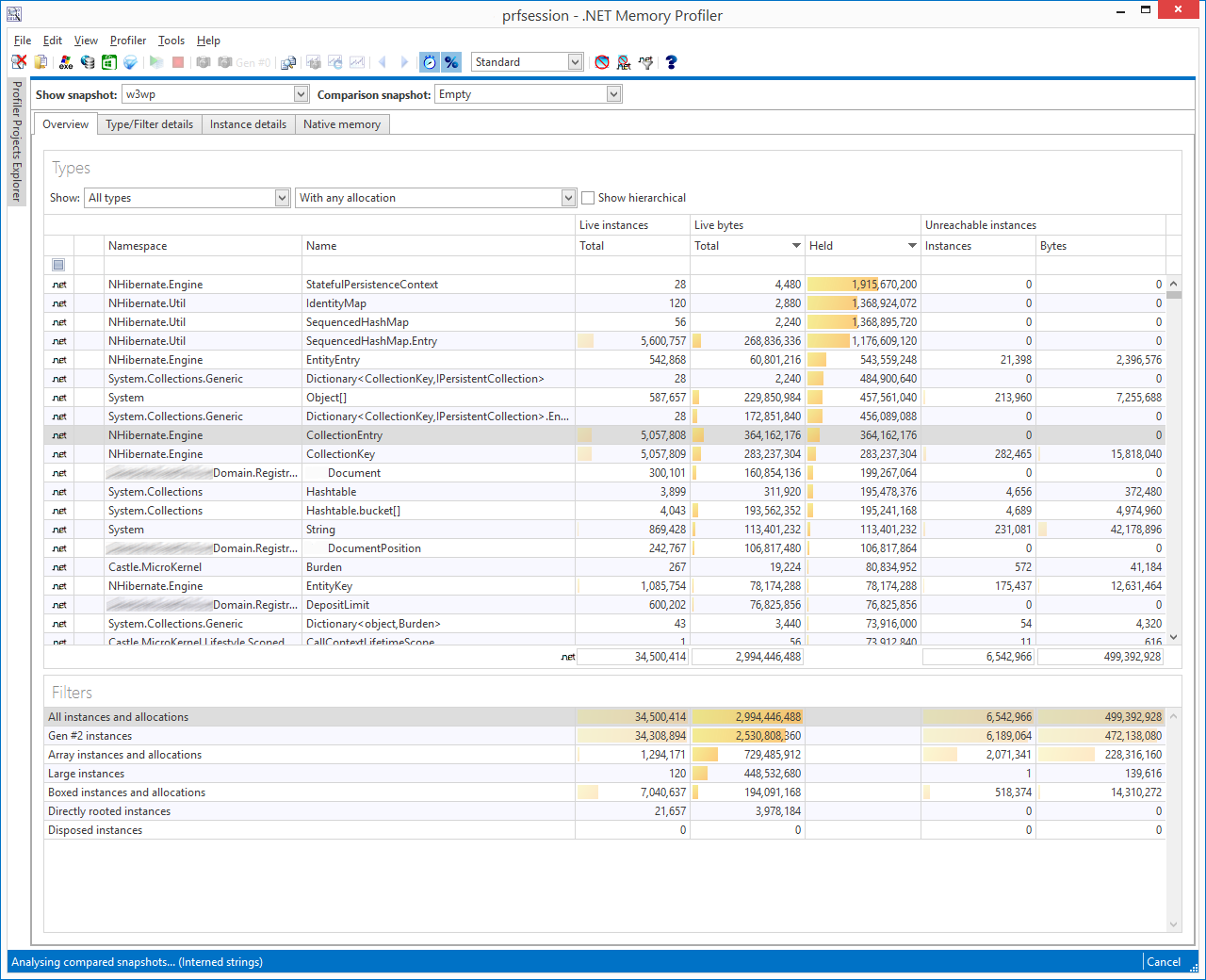 So let’s look what we have here. While this screen alone can give the answer to someone knowing the application, let’s go through it in investigative mode. What we see immediately is that the main memory holder is StatefulPersitanceContext from NHibernate. With 28 instances it is holding almost 2 Gigs of memory. So lets double click on it and go into details. And we see this: 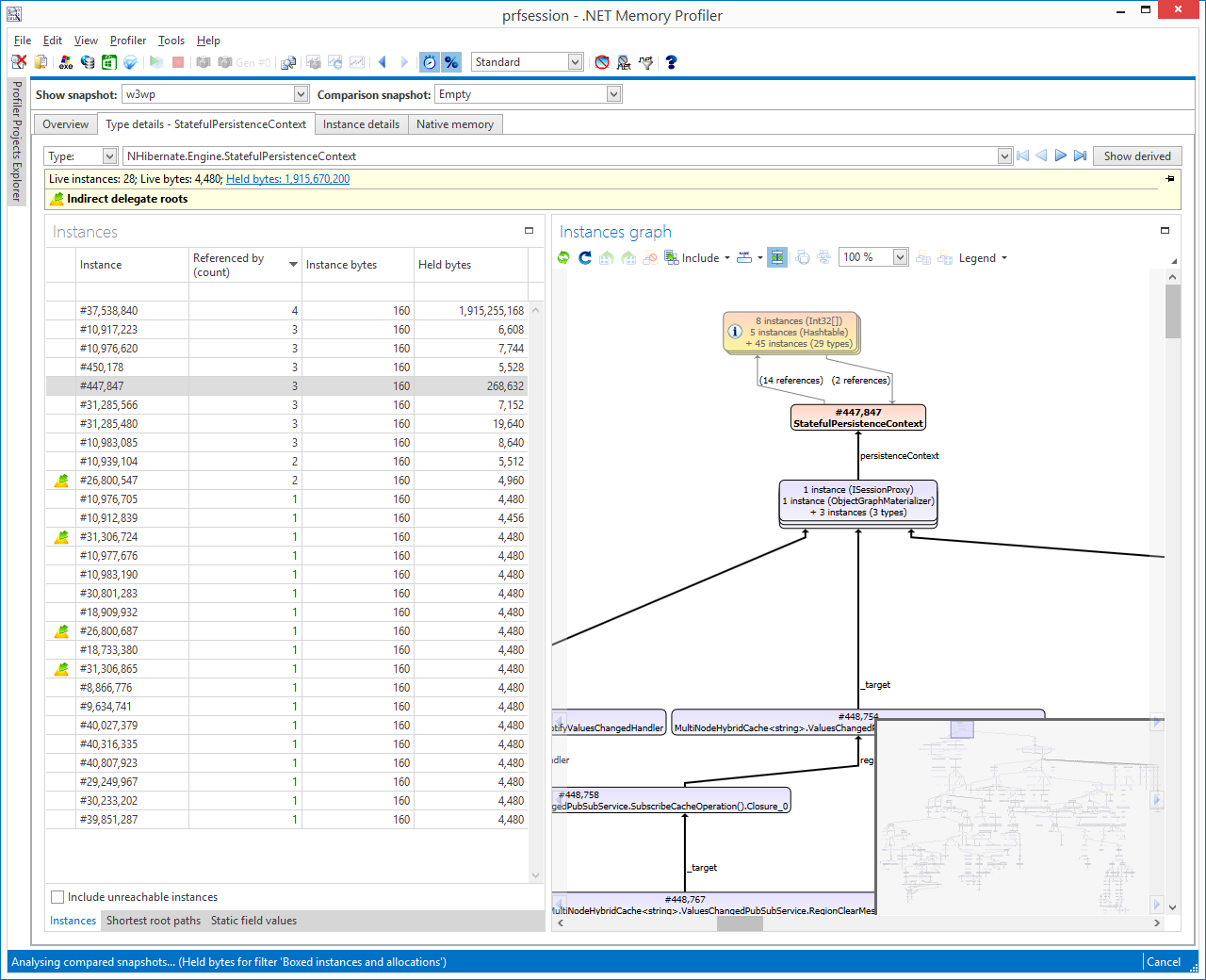 The window on the left shows the current instances and info about them. One instance is responsible for most used memory. So let’s drill into it. Double click and here we go. 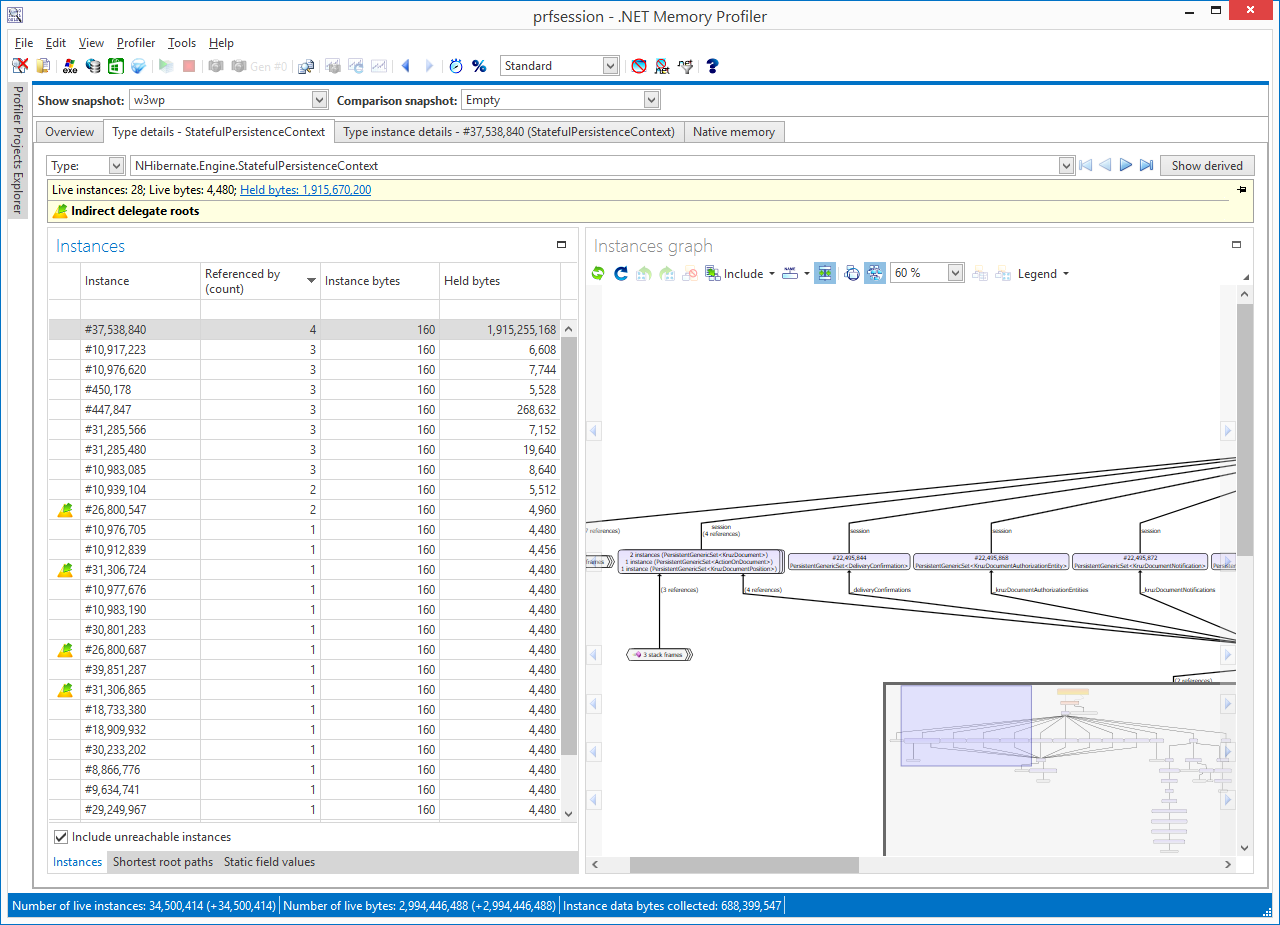 Did You notice that the graph on the right changed? It is showing dependency graphs for the currently selected instances. What can be seen is that Session is keeping hold of Document entity, which has a few collections on its own. The next object referring to this session is on the right side of the graph: 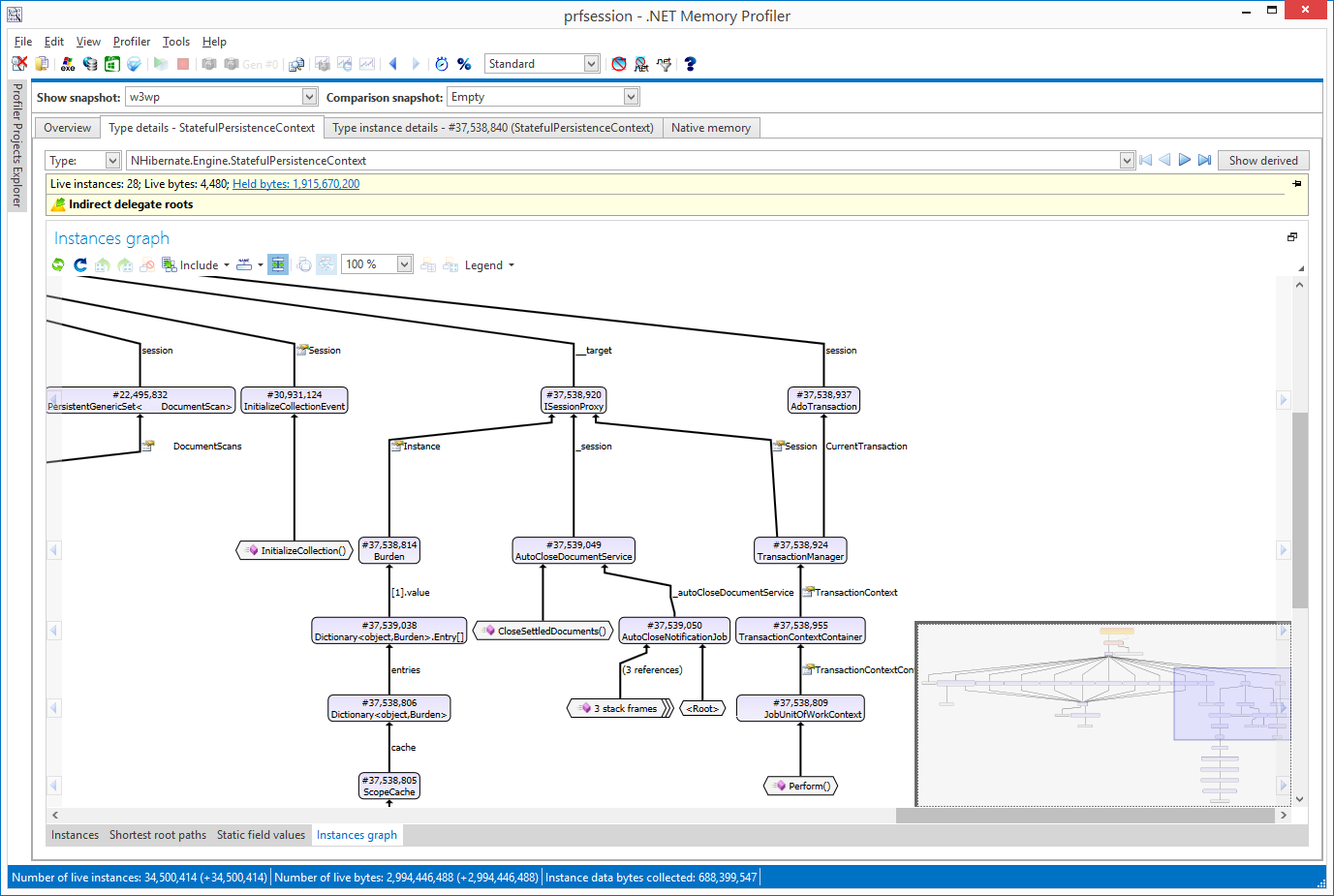 So AutoCloseDocumentService in CloseSettledDocuments is holding to this large session, and the session holds Document entity. So let’s get back to the first screen and see just how many Document entities there are: 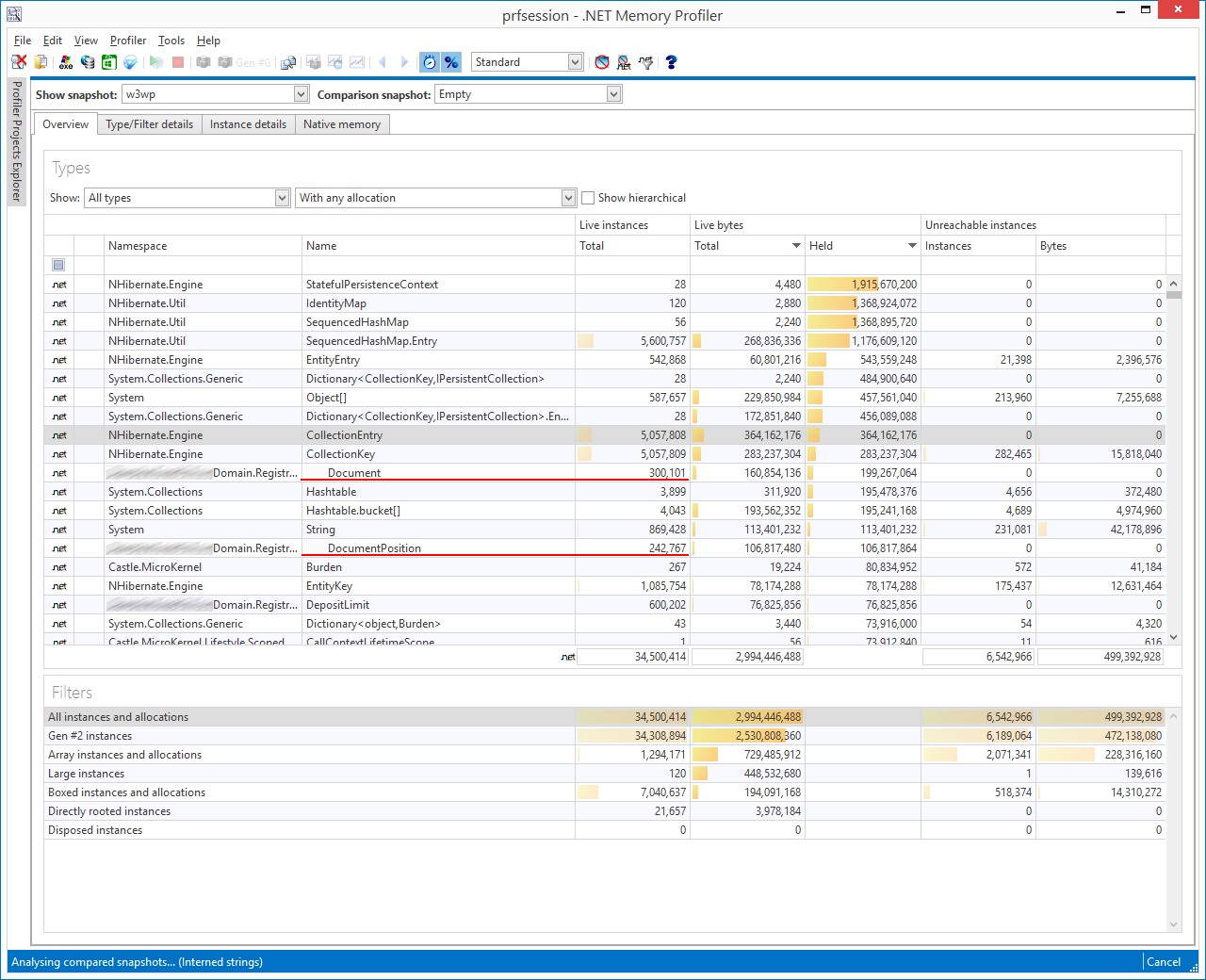 Yup. Over 301 thousand root entities in one NHibernate session. Just to be sure let’s look at the CloseSettledDocuments function:

and a peek into GetApprovedDocuments:

So we listed 301 thousand documents and processed each one independently. Classic n+1 problem that escalated because of large amount of data.