One of the steps in cookit is calculating similar recipes. This is what you can see on the left on the recipe page like this

For the sake of clarity and manageability it’s scheduled as separate Hangfire jobs. Because cookit is running 5 workers, so similarities are calculated for 5 websites concurrently.
The process uses cosine similarity, so it allocates a huge list at start and calculates similarities. A very CPU heavy operation.

So some time after triggering all recipes recalculation I saw this in Hangfire console.

The process can take a while, but on average it lasts couple of minutes. First thing was to check was if the server was doing anything. So fire up Task Manager and here it is: 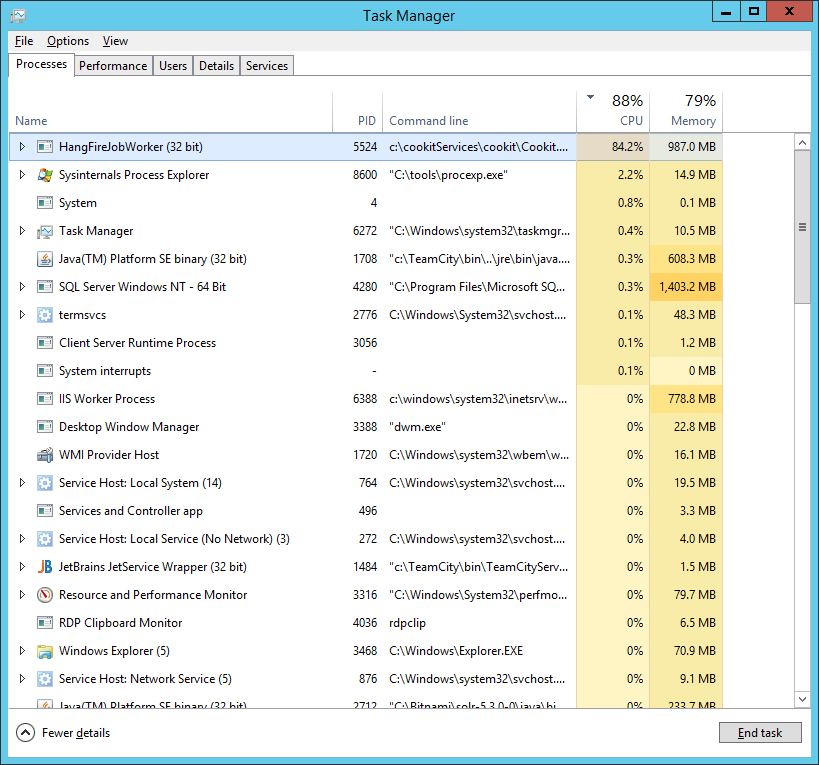 So, something is happening. To better know what, I’ve fired up Process Explorer(run it as administrator!) and in the Properties > .NET Performance tab I saw this. 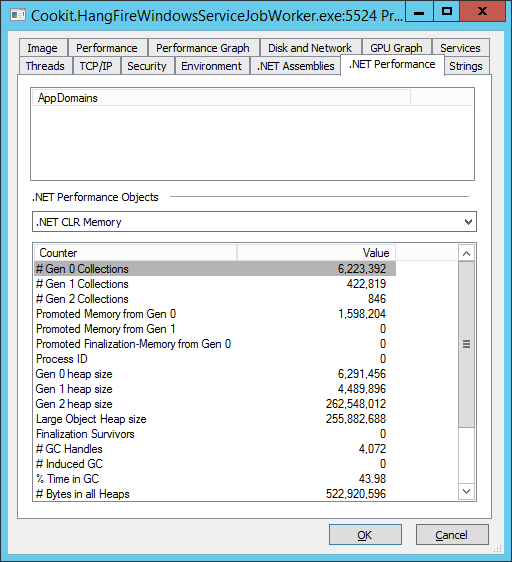 A side note.
Process Explorer is an element of Sysinternals Suite. This is the must have for any developer using Windows. They don’t need installation and weight less than 16MB. I always place them under C:\tools

I really like this tab, because it shows all the main performance counters for .NET programs. And in this case it also worked. Spending 43% (in the peeks) in GC is not a good thing.

Just to be sure that high GC isn’t caused by another issue, like exceptions let’s look at .NET CLR Exceptions tab:

More than I would want, but:

Process Explorer only shows snapshots. To see how it looks over time fire up Performance Monitor (perfmon.exe - it is installed on every Windows) and add .NET CLR Memory % Time in GC performance counter (using the green plus).

Well it looks really bad. To say the least.
This only gives a very high level view. To have a better look let’s add more performance counters:

and we see this: 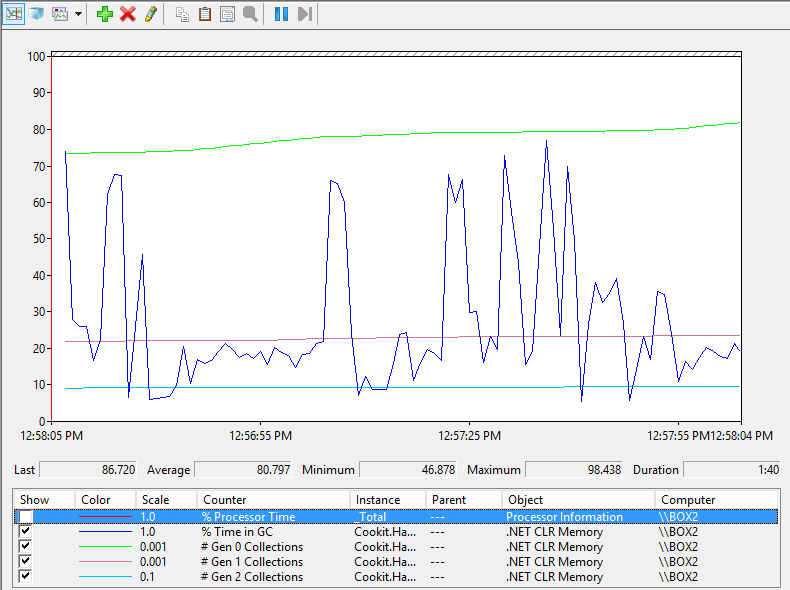 So a lot of Gen 0 and Gen 1 collections, plus a little bit of Gen 2.
This is showing that .NET is under memory pressure and it’s trying to free memory. Because it’s not running a lot of Gen 2 collections means that enough memory is being freed during Gen 0 and 1.
To be sure lets see how big Gen 0 and 1 heaps are (how much memory is allocated on them), and how they behave over time. Lets have a look at those counters: 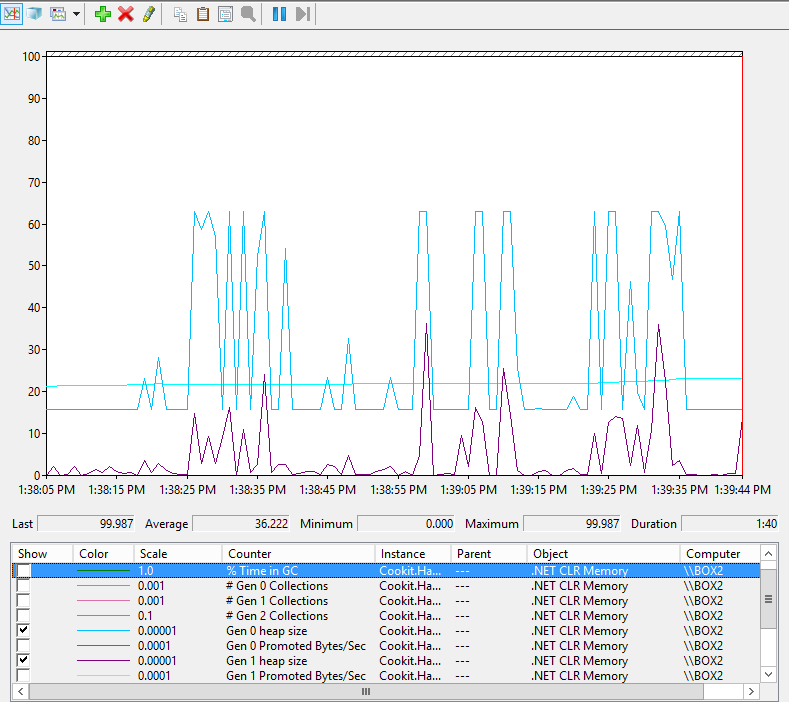 This almost what I expect how the process would use memory:

So were is the almost?
Most allocated object should have a short life span, so they should be collected cheaply in Gen 0. But because Gen 1 is this big it means that when GC is triggered it can’t collect them, so they are being moved to Gen 1. Then Gen 1 collection is being triggered, and previously moved objects are being collected. And Gen 1 collection is far more costly. In summary GC is being triggered too often.

To show my point where is the Performance Monitor with only one worker. 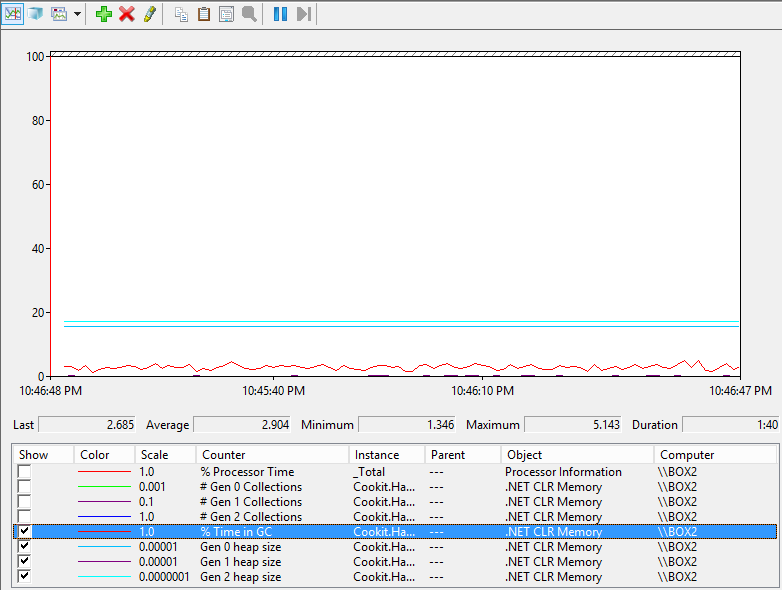 You may be wondering where is the Gen 1 line?
It is still there. It’s those few pixels just above the 0 line is the Gen 1 heap size. And this is the same scale as plot above.
To make a point I’ve added time in GC.
A very boring plot. Just as it should be.

But this only shows the problem. Possible solutions are:

So how to have differentiate the number of workers in Hangfie?
This will be in the next post :)